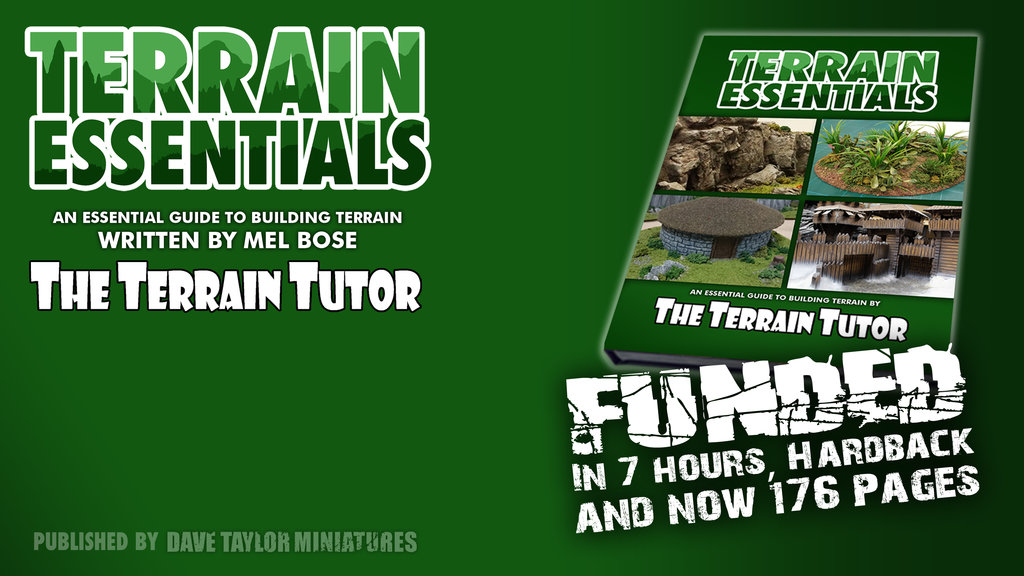 Latest Updates from Our Project:

We had a great livestream show last night (check out The Terrain Tutor on YouTube if you missed it) where we talked a lot about the excellent tables at Salute and some of the other fun we got up to at the event.

We are currently about 65 new teammates away from our next stretch goal - 8 pages on realistic and functional hills! After that we’re closing in on the final 24-pages. Very exciting!

Today, Mel and I dropped in to visit Mantic Games. Mel was obviously angling for an opportunity to nick Ronnie’s new hat, but Ronnie was keeping it locked away. Instead, Mel was delighted to see the vast piles of Terrain Crates ready to ship out to stores. He grabbed a few of the Town and Tavern sets on our way out and when I asked him why he said “Dave, buddy. It’s much easier to show a number of different ways of painting wood if you don’t have to build every single table and bookshelf, and barrel yourself.”

I suspect this may have something to do with the Kits section of the book ;)

Mel, Jase, and I had a bit of a chance last night to take a breather and have a good natter once we got back after Salute.

This morning we awoke refreshed and have been tackling all sorts of tasks. Mel has started editing the AdeptiCon show video today, and will be working on the Salute video later this week and I’ve been contacting some of the lovely folks that had us on their podcasts. Basically we’re getting reading for the Final Week Big Push!

We know that the next four stretch goals will allow us to create the book that Mel has been planning for. It will get us to a 176-page tome of Terrain goodness that will be referenced by terrain makers for years. Here’s Mel’s plan for making sure as many people as possible can ask him questions about the book directly this week (all live-streams will be via The Terrain Tutor YouTube channel).

Sunday Nighter! - 9pm UK time. Tales from Salute! Mel, Jase, and I will be on the livestream show talking about the cool things we saw at Salute yesterday!

World Tour - part 1 - Europe -Tuesday, April 9th. Mel will be going live from his living room at 7:30pm Western/Central European time (6:30 UK) to catch some more supporters from across Europe.

World Tour - part 2 - Australia/Asia - Wednesday, April 10th. Mel will be live from his living room at 7:30pm Adelaide/Tokyo time (6pm Perth, 8pm Sydney) to make it easier for supporters on the other side of the planet to jump in on the conversation.

World Tour - part 3 - UK - Thursday, April 11th. This will be Mel live-streaming at his regular time for his Thursday show.

And then the Conclusion Livestream next Sunday. We’ll have more details on that later this week.

You have all been such wonderful supporters during this campaign! You have shared it with your friends and family, your local gaming groups and so on. This week we ask you to do it all again, one last time. For gaming and terrain groups and forums, don’t forget to make sure the mods/admins are alright with you posting links to the KIckstarter first.

Thanks again for your excellent support, and let’s make sure we get all the way to Mel’s dream book.

I've nicked Dave's laptop because I'm so stoked about reaching this goal. One of my biggest worries was having to pick two out of the three feature builds for the book. Hitting this goal means we've got the medieval motte and bailey, the future, high gothic, industrial, facility and my ruined frostyheim manor! We’ve got all the buildings and ruins that are essential!

This is the start of the super realistic stuff, with this goal being focused on the tips, tricks and techniques to produce very realistic hills that look great and also work as functional gaming pieces!

Now, our current situation is that it looks like we might fall short of our final 176 pages by about 16 pages. The community has got us this far, and as we’re here at Salute, it’s time for the traders who keep saying that I’m a credit to the community to pick up the baton and help us stay on target.

This weekend Dave and I are pushing the book, and I’m getting the terrain, tables, and traders for the Salute vid, I’m asking the traders to step up and carry us forward!

If you’re a trader, or if you know a trader, get them to share the Kickstarter campaign, endorse it with why they’re sharing it, include the hashtag #Traders4TTT and tags @theterraintutor, so I can make sure they get called out on the Sunday Nighter Trader Roll of Honour!

So, let’s get the traders closing the gap and then we’ll pick up the ball on Monday for the final week and those final super realistic sections that are the cherry on the top of my planned book.

Thanks for getting us this far folks, you’re all awesome, now let’s get the traders helping us out to create something special!

Let’s get cracked on!

We're absolutely flabbergasted! The campaign has just ticked over 3,000 backers. Terrainiacs from across the world have been brought here to this campaign thanks to your help, and are now continuing to spread the word. Mel and I thank you all! We're still playing catch-up, so you can expect to see a number of fairly rapid-fire Updates over the coming days.

• Here's a link to an A4-size flyer that you can print out and hand out at your local stores over the next 10 days (as long as the store owner agrees. LINK.

• If you are going to be at Salute at the Excel Centre in the London Docklands on Saturday, please keep an eye out for Mel and myself. Additionally, check out The Terrain Tutor's Terrainiacs Facebook page for information about a meet-up at Salute.

• Now, while we were at AdeptiCon there was plenty of opportunity for quick chats grabbed here and there, little debriefs where we discussed what we'd just done, who we'd spoken to, and ideas that had been generated. Every so often, an idea would pop up that we both really liked and we'd put it to additional discussion. One of these was an idea about how to bring additional informational (our word of the convention) content to the campaign.

Terrainiacs have been leaving comments and sending messages requesting content in the book about basing their wargaming miniatures. We want the book to remain focused on tabletop terrain, but we know there's a crossover between the two topics, so I suggested we do a 20+ page PDF as an Add-On. Mel agreed because he knows that by adding it to the campaign it'll see us through a stretch goal or two, meaning more great pages in the book! This PDF (working title: Fifty Shades of Basing: Mel Style) will include the theory and techniques to adapt the basing of terrain pieces to smaller surfaces, and include 50 examples of various themed terrain.

In a previous update you have already started providing cool ideas for Mel to cover. Feel free to keep suggesting ideas in the comments below. Mel is keeping track of them all. Once Mel has finished all the writing and photography for the book, he'll start working on this Add-On, and once I've sent the book files off to the printers, I'll be able to do the layout for the PDF so everything will be ready at the same time for dispatch to you awesome Terrainiacs.

This is available to those who have pledged the $25 level and above. To add the Fifty Shades of Basing PDF to your pledge you just need to hit the Manage Your Pledge button and add $7. As this is a digital product there'll be no additional shipping costs.

• And finally, Mel will be back in the studio for his Thursday livestream at 7:30pm BST and he'll be talking about his AdeptiCon adventure and revealing some details about his livestream "world tour" for the final week of the campaign. Make sure you check it out!

We're getting closer to reaching the next stretch goal. Onwards and upwards!

Congratulations, Terrainiacs! You’ve helped power through another stretch goal, and Mel will be adding another 8 pages to his Water and Snow chapter. We are well on the way to the next goal (8 more pages on Buildings and Ruins) and after that we’re hoping to add another 8 pages to Hills and Rocks!

Over recent months, Terrainiacs have been asking Mel about methods and techniques for working with various cardboard terrain kits. We’re excited to let everyone know we’ve been talking with the team at Battle Systems and they’ll be sending Mel some of their awesome Shanty Town kits. In the Kits chapter of Terrain Essentials we’ll get to see Mel work his Terrain Tutor magic on some already fantastic cardboard buildings.

To get an idea of what the Battle Systems terrain looks like, head to their website - battlesystems.co.uk

Mel’s going to be home late tonight and will need his rest, but he’s keen to jump in to the comments and questions ahead of Salute this weekend!